ALL SANDWICHES ARE SERVED WITH CHOICE OF SIDE:

Breaded chicken breast tossed in mild or hot buffalo sauce and served on a toasted kaiser bun with your choice of bleu cheese or ranch sauce.

Hickory smoked, tender and mouthwatering pulled pork served with a side of bbq sauce

Your choice of tender grilled chicken or choice philly steak meat smothered with sauteed onions, bell peppers and Swiss cheese served on a hoagie.  Add mushrooms or jalapenos $.50 each.

Breaded or grilled chicken breast served on ciabatta bread and topped off with our spinach artichoke dip and tomatoes.

Beer battered shrimp deep fried  served with cocktail sauce and choice of side. 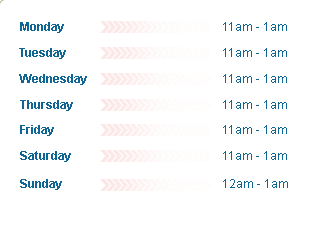 We Are Located At

How to Reach Us